Pick up before and transfers after the trek.
A night accommodation in Senaru before the trek
Trekking guide and porters who will carry the cooking gear and camping equipment
An experienced English speaking guide and professional porters
Entrance fee to the national park
Food and drinking water on the trek (3 litre mineral water a day/person)
Tent, toilet tent and paper, sleeping bags and mattress, pillow
Price Excludes:

After an early breakfast we depart Senaru and travel by 4WD vehicle to Sembalun. We register at the Rinjani Trek Centre in Sembalun (1,156 m) before commencing our trek. The trail initially passes through undulating open grasslands as it winds up the mountain. We stop at Pos 1 and Pos 2, pausing for rest breaks and snacks. At Pos 3 (1,800 m) we stop for a longer break for lunch. After lunch we commence the steep climb up the crater rim. We camp the night at Sembalun Crater Rim (2,639 m) with amazing views of the sunset, Lake Segara Anak, the summit of Mount Rinjani and northern Lombok.

We wake at 3am for a light breakfast before commencing the challenging three hour trek to the summit (3,726 m). We arrive in time for sunrise, the best time to enjoy the spectacular views. Returning to our campsite on the crater rim we pause for a hot breakfast and a rest before continuing our descent into the segara anak / lake. We stop lunch and we ceam on the shore of Lake Segara Anak (2,000 m)The afternoon can be spent swimming in the hot springs, fishing, exploring the lakeshore or simply relaxing.

After breakfast we continue our descent of the mountain, utilising the rest spots of jaran kurus, birisan nangka and waterffal penimbungan and stopping for a longer break for lunch along the way. As we descend the mountain the forest becomes thicker and increasingly lush. We arrive in Torean (601 m) at approximately 1 pm, from where you will be transported to your next destination.

The Mount Rinjani torean route is an anti-mainstream route, the path has many branches and the path is not very clear but has a close distance to Segara Anak with a million views along the way, namely many waterfalls or water sources. It’s just that on this torean route the terrain can be said to be very steep because it passes through several cliffs and rivers of blerang water.

Torean has never been as popular as Sembalun and Senaru which already have the prestige of being the official entrance to TNGR, but Torean is also not at the level of other “minor” Rinjani routes, such as Jeruk Manis, Benang Stokel, or the newest official route Timbanuh. Torean has long been used by local people as a “short route” to go directly to Segara Anak Lake, usually for fishing purposes or for medicinal purposes by bathing in hot springs located at several points on this route.

One of the views of climbing Mount Rinjani through the Torean route, Lombok. Not many climbers pass this route. 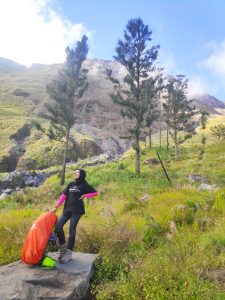 The Penimbung waterfall, 100 meters high, is one of the most beautiful views when climbing Mount Rinjani from Torean 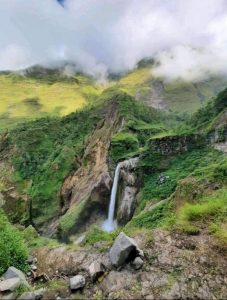 Want to join the discussion?
Feel free to contribute!

I am Adi ,Rinjani Trekking Info, Owners may I help you?